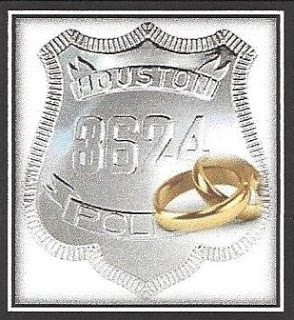 were looking forward to their second counseling session.  Both were aware of the high divorce rate of 75% in law enforcement marriages and were committed to beat the odds.   Melodys’ first marriage had been to a police officer.  After it failed, she had idealized a criteria for the type of man she might allow in her life.  Law enforcement officers had not been on that list.  During their first session with Ms. O’Neal, she had familiarized them with a list of problems typically faced by  police families as well as helpful strategies for resolving such issues.

As they waited in their counselor’s reception area, both agreed that the awareness gained in their premarital counseling helped them feel more positive about merging their families. Both felt that becoming aware of problems typically faced by law enforcement families had enabled them to gain a sense of control over dealing with the hurdles successfully. The success of every kind of relationship (marital, parent, intimate, friendship, business) requires mutual commitment.  We tend to make commitments to causes that we want to succeed in.  Melody and Paul were wisely seeking premarital counseling before entering a second marriage for each, blending their families.

Their counselor wasn’t surprised that despite Melody’s experiences and criteria, she was considering marriage with a police officer.  People tend to be attracted to what is familiar to them.  Our subconscious minds recognize situations (good or bad) that coping behaviors with corresponding neurological pathways have developed for.   (The neurological pathways strengthen with repetitive application of the behaviors.  The tendency to behave in the same manner increases.)  Changes to unknown situations can stimulate releases of neurochemicals that cause discomfort while our defense systems determine safe responses.

Both Paul and Melody told of recovering from painful marital situations and divorces.  Ms. O’Neil began their relationship counseling with helping them look at their individual communication patterns during conflict situations.  (Our first natural tool for bonding with another involves communication.  It is the foundation for relationships, especially marriage.)

She asked each to complete a copy of the following questionnaire.  They were not to discuss their responses with one another until she led the discussion at the end of the exercise. 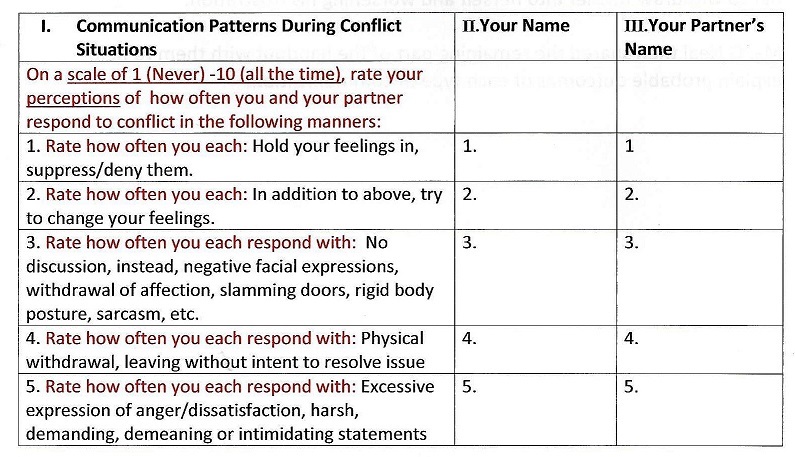 Melody’s responses indicated that during stressful disagreements she tends to hold her feelings in.  She preferred to make peace by accepting and complying with the instructions or requests of others.  At times she would try to make herself feel better by listening to music or taking a warm bath.  She reported that Paul seldom criticized or demanded much, but she could read his feelings by his facial expressions. “His jaw tightens and his eyes actually feel distant,” Melody explained.  “When that happens, he usually recalls an errand he needs to take care of.”

Paul agreed with her statements.  “It seems we both try to distract ourselves until we are calmer and in better moods.  When Ms. O’Neal asked if they talk about the disturbing issue at that time, both shook their heads.  Paul volunteered, “No, we just try to have more good times than bad times.  I see enough bad attitudes on the street.  I don’t want that in our home.”  The counselor smiled, and handed them a second page to the activity.

Ms. O’Neal explained, “Both of you are using avoidance strategies.  Melody is trying to hide her feelings from Paul and herself as well.  And Paul, you may be trying to hide your feelings as well, but your body won’t allow that.  I wonder if that is because you’re used to having the authority to control situations.  Both of you may be trying to do so for good reasons, perhaps to not hurt one another and to keep peace between you.  But in reality, feelings than are held in and not addressed will remain in each of you, festering and getting worse.  Leaving with no intention of discussing and resolving issues can damage relationships and make it easier to walk away from them.”

Enlightenment was obvious on each of her client’s faces.  Both wanted to improve their communication.  To fit the session time frame, their counselor chose I-MESSAGES, a simple 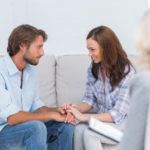 communication method developed by Dr. Gordon Thomas for improving all relationships.  Ms. O’Neal explained, “I-Messages get rid of blaming, criticizing, judging, threatening and demanding.  They allow you to express what you want or need done to resolve conflict.  The process is a key that opens the door to effective communication for couples.  However, you may find it useful when talking with your children, friends and at work.

“Let’s practice this with a scenario:  Paul, picture yourself driving the two of you to a restaurant.  It’s raining hard and the traffic is heavy.  How does your body feel in that situation?”

“Probably tense.  Driving in heavy traffic is bad enough.  I’m always watching for idiot drivers who cut in and out of traffic.  Bad weather makes it even worse.”

“Melody, Paul’s mood reminds you of an earlier event.  You are unhappy about his response to the behaviors of one of your children.  You initiate a discussion about it.

“Paul, do you think it would be a good time for her to open such a topic?”

“Probably not.  Just thinking about it makes the muscles in my neck and shoulders ache.”

“So here is how the process should go:

After guiding Melody and Paul through the exercise a couple of times and giving them a copy of the instructions for I-Messages, Ms. O’Neal encouraged them to refer to the handout as a homework assignment.   An appointment was made to continue their therapy the next week.

This has been the second of a short series of blogs about the journey of two people preparing for marriage, blending two families.  Along the way, they learn to appreciate and love one another better.  Melody and Paul are fictional characters, not actual clients of mine. I developed their story to help illustrate some of the frustrations families face.  I learned early in my psychology career that couples’ therapy is critical to family therapy.  The blending of two families can be helped with family therapy.  Good communication skills set a foundation for future sessions.

The focus of this article is on law enforcement families. However, many of the problems described above are prevalent in families from all walks of life.  It is my hope that this story encourages them to seek counseling that is helpful from the beginning, non-blaming, educational, and interesting to the clients.

The counseling exercises included in the story have been successfully used many times in my office.  A form for I-MESSAGES for communicating with children is available in my book MAGICAL YEARS TO LEARN WITH ME:  A GENTLE GUIDE FOR CHILDREN, PARENTS, TEACHERS AND COUNSELORS.  It is available on this website, on Amazon.com and through Barnes and Noble Books.

MARRIAGE MANAGEMENT MAGIC
DISCOVER YOUR VALUES & THE LIFE YOU DESIRE 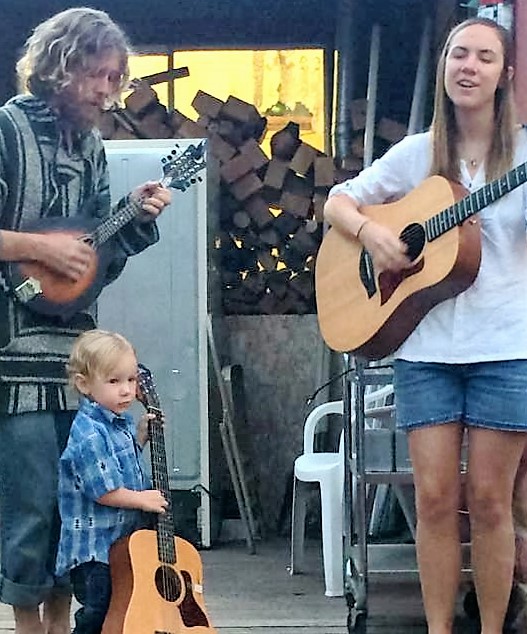