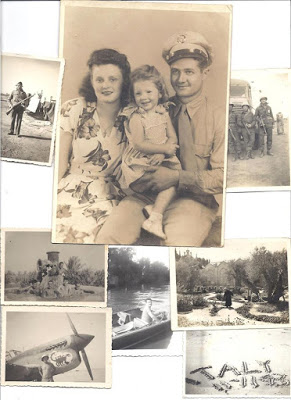 HAVE A SAFE AND HAPPY MEMORIAL DAY!

I am the first child of a WWII romance and marriage.  My parents, Dorothy Marshall and George Bernard Ferrell, were married August 2, 1942.  Shortly thereafter, my dad shipped out to North Africa as a member of the U. S. Army Air Corps.

My arrival in the world nine and a half months later helped divert the attention of my mother and grandmother, Ella Adair, from the absence of my father and grandfather, Glenn Adair, who were serving in the military.   The encouragement and positive expectations received from the two adult women and teenage Aunt Renie whom I lived with enabled me to strive, learning to walk by my sixth month and talk early as well.  I became a princess.

Memory development is triggered by sensory experiences correlated with verbal skills.  Mine commenced during painful teething experiences while still nursing.   The ability to recall early childhood thoughts and feelings has helped me better understand  young counseling clients.
There were many visits during my first years to the lively Irish-American home of my great grandparents, Emmett and Lizzie Regan Horn. They lived in a white gingerbread house across the street from a Catholic complex that included a cathedral, school, the priests’ home and the nuns’ dorm.
I misinterpreted the pale strict facial expressions and black winter garb of the sisters to be that of witches.  I ran from the porch and hid in  the house whenever I spotted one strolling on the sidewalk. Despite my fears, I was christened in the Beaumont, Texas, cathedral named after St. Anthony; I learned to dutifully wait for church chimes to ring and blessings be said before eating my meals.
When I met my dad for the first time, I was almost three.  Upon our introduction, I ran to the bedroom I  shared with my mother, took his picture from her dressing table, then tried to explain to him that the picture was my daddy, not him.  I wasn’t used to obeying the picture; some adjustments were needed on my part.
Before long, Dad moved us to Pelham, his quaint, quiet hometown in southern Georgia. It became obvious to me that I might not be a princess in the home if my new grandparents, Jesse and Marietta Ferrell.  My dad’s two brothers had been on ships in the Pacific while Dad served in Africa, then Italy.  My grandparents of the Ferrell clan apparently  needed their own princess for a diversion.  Aunt Mary is three months my senior.  Three- year-olds understand the hierarchy of age seniority, and that an aunt is due respect.  I also met a cousin three months younger than me.  For the first time in my life, I had child playmates. Our Aunt Mary was the leader whom cousin Libby and I vied for the attention of.
Marriages following short romance periods are risky, especially when the participants are strangers from different religions and cultures.  A Catholic girl from a mid-sized industrial port city such as Beaumont has a different culture from that of a Baptist family from a small farming town that is prideful of being one of the original thirteen colonies and the tomato capital of the world.  Mother didn’t quite fit in.  My Georgia family referred to her Catholicism as a voodoo religion.  We became Baptists.  Mom even taught Sunday school with my dad.

During a vacation to Beaumont, young Texas cousins assured me that all Baptists, including me and my family, would end up in Hell.  Their words hurt me, but life had already taught me several lessons about coping by listening and observing, looking for good in both sides, adapting, accepting and appreciating differences.  I was fairly certain they didn’t understand that God doesn’t do that to good princesses and their families.    However, I still don’t like to hear another person’s faith criticized.

I have a lot of good memories of my father.  He taught me how beautiful a sunset can be and how to use it for making shadow animals on the wall with my hands. He told me funny stories about a pet goat he’d had as a child, but had to give away when it ate a neighbor’s laundry off their clothesline.  Once Dad told me that before the war he had wanted to go into the ministry. That was a side of him I was surprised about.  It helped me understand why he always saw that my sister, Teresa, and I attended Sunday school.  In my teen years I developed a love for water skiing and he provided plenty of opportunities for me to do so.

Dad once revealed that he was offered an opportunity late in the war to go through officers’ training,  But it would have required his commitment to go to France for continuing to fight. He chose to return to Mother and me.  However, he thought things would have been better for us if he’d had a college education.  That became one of my strong values.
My dad never talked about his military experiences.  I was probably eight the day I heard playmates bragging about their fathers’ heroic experiences during the war.  I left our neighborhood softball game to run home and ask Dad what he had done during the war.  He told me, with a grin, that he’d been a colonel in the underground balloon corps.  Truth was a virtue in our family, and his story sounded impressive.   I ran back to explain my dad’s war experiences to my friends.  I saw the other fathers’ smiles and suspected something was not quite right.  I never asked Dad about the war again.
Years later, during my training and certification for treating post traumatic stress disorder, I remembered being awakened and running to my parents’ room the first time I heard Dad’s screams about being bombed and shot at.  My mother reassured me it was just a nightmare, that all was okay and I should go back to bed.  After that, I responded to his screams by hugging Brownie, my teddy bear, for comfort.
Dad remained untreated for PTSD.  He self-medicated with alcohol,  As a youth, I often wished he could be helped with his alcoholism but believed there was no treatment available.  I was a young mother when he died at age 52 while in a hepatic coma.
I’ve never attained certification for treating chemical abuse  However, I have advanced certifications for treating trauma, loss and grief.  Administering therapy to children, women and men, including those in uniform,  has been an honor and my small contribution to mankind. I never fail to think of my parents and sister after a session.  Violence affects whole families.  I hope that someday mankind can shift efforts from war and greed to building a world that provides our basic needs and wellness, including accepting and understanding others, peace and love.
DEDICATED TO VETERANS AND THEIR FAMILIES
The following pages a from MAGICAL YEARS TO LEARN WITH ME and SEE ME TALK, my read-play-learning-together books for children, parents, teachers and counselors.

THREE – MEMORY MATTERS
CASE STUDY 3:  Memories and development
Eva’s dad was militarily deployed before her birth. Her first three years were filled with her mother’s constant positive attention, nurturing and teaching; she began to walk and talk by six months of age.
Positive environment and frequent verbalinteractions with adults enabled Eva’s memories of early childhood incidents.  Notice some of the issues that were the focus of her thoughts:
First Memory:  While nursing, Eva pulled back on the nipple to ease herpainful, itching gums.  Her mother’s reflex was to ward off the attack with a slap. Eva’s brain registered shock and fear; her first memory was stimulated and stored!
Food Preference:  Eva recalls insisting her milk be sweetened and banana flakes from a blue and yellow can be sprinkled on cereal.
Pleasure, curiosity, maneuvering objects and ownership:  Eva liked to sit by a screen door, feeling the warm sun on her skin, using her finger to make the black dots in her teddy bear’s plastic eyes move. She wondered about the dust particles floating in her sunbeam.
Boredom and anger:  Eva’s discipline was to sit, facing a corner.  She recalls feeling bored and angry when so limited. She rebelled once and hid in a tree, watching searchers until rain forced her to reveal herself.
Remorse:  Eva was dismayed; her teddy bear was soggy after its bath in the toilet.
Shyness:  Eva recalls feeling painfully shy, hiding behind her mother, and wishing she could feel better when meeting a new child.
Worry and coping:   Eva was aware that her dad (the man in her picture) was fighting in a war. Because Eva attended western movies with her mother, she daydreamed of arrows and bullets aimed at him. Eva’s imagination created a large glass rock (that only she could see) to shield him.  It comforted her mind.
Concrete thinking and comfort with familiar:  Eva’s father returned just before her third birthday.  Initially, she rejected his claim to be her daddy; she showed him the picture that she had been taught was her father.
Judgment and sibling rivalry:  At age four, she was told of a new baby sister or brother that would be hers.  She was reprimanded for trying to lift the new baby and decided that adults had lied to her.  The baby really did not belong to her.
PAGE FOR READING TO CHILD
THREE – MEMORY MATTERS

EVA’S DADDY IS FAR AWAY. SHE MISSES HIM. 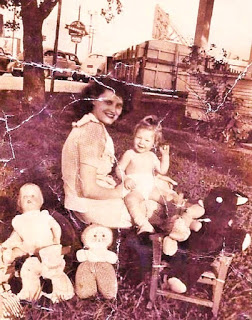 SHE SENT HIM THIS PICTURE THAT SAYS,

HI, DADDY, I WISH YOU WERE HERE TO PLAY WITH MY TOYS

TAKING TURNS, PLEASE TELL:
WHO DO YOU MISS THAT IS FAR AWAY?
KEYS TO PARENTING MAGIC
MARRIAGE MANAGEMENT MAGIC